skip to main | skip to sidebar

Big transition in life.  Starting Mission Church.  I'm blogging there for the time being. Not sure yet how I'm going to revamp theproblemwithreligion blog.  Just wanted you to know where I was!

Posted by Jonathan Foster at 11:50 AM No comments: Links to this post

Continued from previous post... Worship is realizing the value of what you are carrying around.

To carry the thought further...  additionally you can imagine my father would have made changes based on the realization that there was gold in the rocks.  One doesn't find something extraordinary in something ordinary without a reaction.  He would have reoriented his life and all our lives around this new reality.  He would have made plans to acquire more rocks and extract more gold.  To ignore treasure is unthinkable.

So it is with worship.  It reorients our life.  If something is truly valuable it changes us and gets us on track.  It becomes the magnetic field of our compass.  Are you worshiping the one thing of infinite value?  If so, how is it changing you?  How is your life oriented?

Posted by Jonathan Foster at 11:48 AM No comments: Links to this post

I remember collecting rocks in the mountains as a boy.  I had read somewhere that there might be gold in the rocks.  My father didn't discourage me.  He humored me (and certainly humored himself) by allowing me to bring a box of rocks back home so that I could boil them on my mothers stove to extract the molten gold!  I was convinced I was carrying hidden treasure around in those stones.  My father knew I wasn't carrying anything substantive.  Imagine for a moment if my father had been wrong.  Think about what his reaction would have been if gold were to ooze out of those boiled rocks!  His perspective would have changed.  He would've thought something to the effect of, "I had no idea what we were carrying around had so much value."

Those of us who have invited God to move into our lives are actually carrying around a hidden treasure.  It is worth far more than anything we can imagine.  Sometimes we forget.  Sometimes we lose sight of what we have.

Worship is what happens when we realize the value of what we carry.

Posted by Jonathan Foster at 7:55 AM No comments: Links to this post

Discontentment is a Blessing

There is a fine line between marketing and greed.  The poor begging for money is one thing.  It's not what anyone would suggest is ideal but it's understandable.  The rich begging to get richer is another thing.  Who could tune into American media without noticing the advertisers attempt at stirring up discontentment?  Who could tune into American media without noticing the apparent discontentment with which the ads themselves are created?  These creative solicitations are effective because the people stirring the pot are often discontented.  They are experts in the field.  Of course, there are always exceptions to the rule but by and large this is what and who is driving our culture.


And we listen to them.

The advertisers get it right when they tap into discontentment.
They get it wrong when they don't offer something substantive.

So, we crumble under the weight of wanting more.  And I'm guessing this is right where our spiritual enemy wants us to be.  But the very act of crumbling, failing, realizing our own confidence is faulty, means we're accessing the way to victory, succeeding, understanding our confidence has to come from somewhere else.  It's the stereotypical movie scene where the heroes become trapped in a cave somewhere because of a rock slide only to discover that the while the boulders have blocked the primary way, a secondary way has opened up far off in the corner.

We are simultaneously watching the fall and rise of our generation... the crumbling of what we glory in and the salvation of the glory of God.

Posted by Jonathan Foster at 7:20 AM No comments: Links to this post 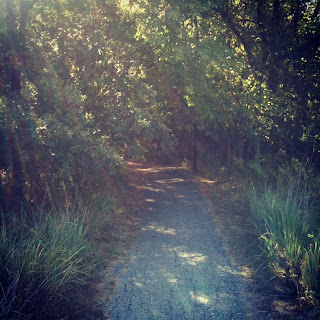 Annie Dillard says, "Nature is like one of those line drawings of a tree that are puzzles for children: Can you find hidden in the leaves a duck, a house, a boy, a bucket, a zebra, and a boot?"  I think she's saying... can you look hard enough to find a path... to find God?

Posted by Jonathan Foster at 6:14 PM No comments: Links to this post

We've moved all of our stuff into a climate controlled storage unit (my parents basement) and we've moved the remainder of our belongings and ourselves into my Sister and Brother-in-law's extra rooms (their basement).  Thankfully, the MidWest has basements otherwise this move wouldn't have been possible.  We've moved here to start something.  But in order to start something you almost always have to give up something.  Among other things we've given ourselves up to live in a basement.

I think a basement is kind of a 21st-century-suburban-cave.  I'm reminded that God does some of his best works in caves.  David hid in them for years while waiting for King Saul to come to his senses. Elijah, in exhaustion took cover in one after running for his life.  Moses in the cave that was the cleft of the rock while God passed by.  All men were changed by the cave.  They entered out of humility and necessity.  They exited with courage and expectation.

All of these events point toward the ultimate cave experience...  Jesus... and his cave.  He was placed in one for 3 days.   The cave was where God's humility and power collided.  In Jesus The echoes are still being heard and will, in fact, never fade away.  The cave was the plan.  It was always the plan. Why are you running away from the cave?  The only real power in this universe is the ability to give power away.  The only real way to be God is to stop acting like you are God.

Posted by Jonathan Foster at 7:17 AM No comments: Links to this post

Posted by Jonathan Foster at 6:36 AM No comments: Links to this post

The Problem with Religion

The problem with religion is that sooner or later it's defined by who's following the rules and who's not... kind of like the public swimming pool with fences, wristbands and lifegaurds watching your every move. A relationship with Jesus is more like the diving board at the public pool. When you're on one all you do is dive and invite others to do the same. There are places for structure. But when we subordinate 'the relationship' to rules everyone loses. If rules could saves us we wouldn't need a Savior. (my paraphrase of Galatians 3)

Jonathan Foster
I'm married (Johnna) and have three children (Quincy, Shay and Evan). I've done some school (K-12th, College, Post-Graduate work... I think 2nd grade was my favorite). I'm currently planting a church (actually it's God planting the church. I just get to be the lead follower) in Overland Park, KS called Mission. Check it out at missionchurchonline.com.

[1]Share your comments.
[2]Email a post to a friend.
[3]Submit to a networking site by clicking on 'bookmark' bar below each post.
[4]Subscribe to the RSS feed of this blog
[5]If you blog, feel free to link my blog any time... unless what you're writing is no good.